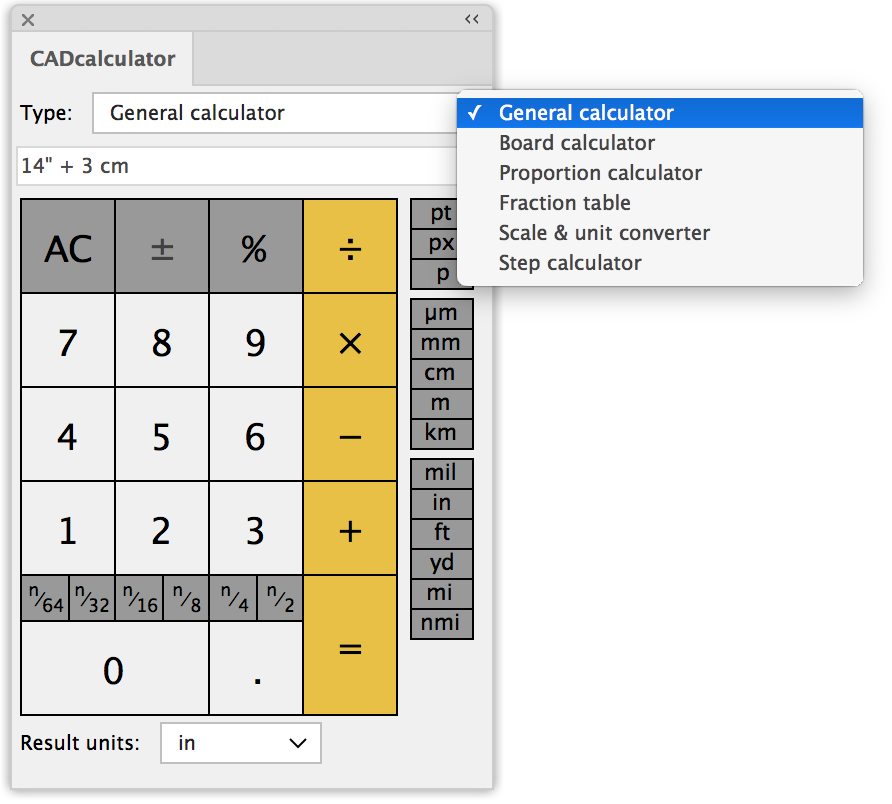 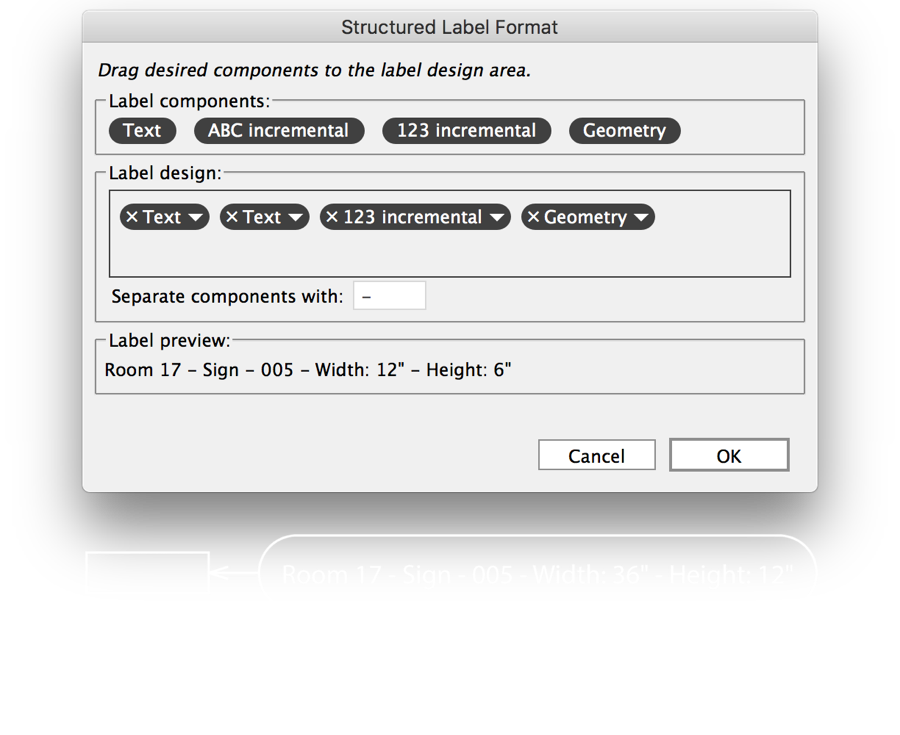 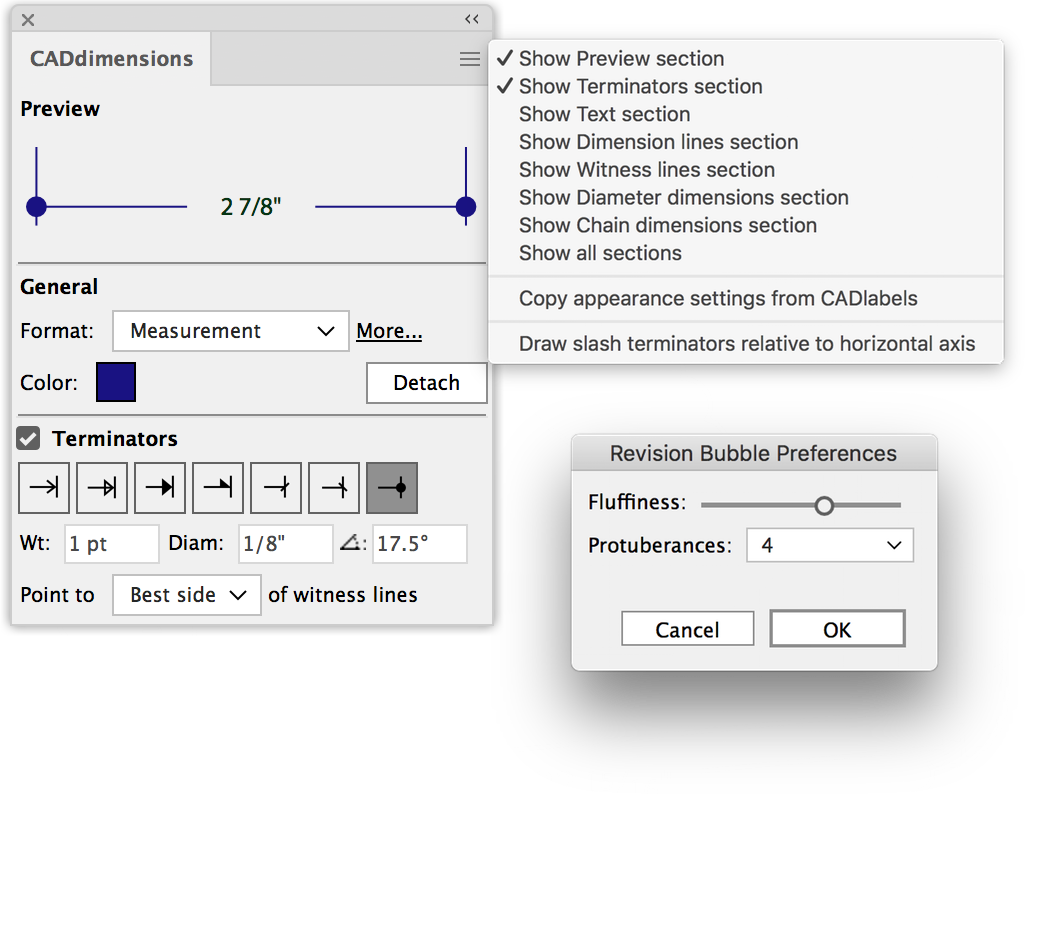 Draw, dimension & label anything in scale
Click and drag dimensions or labels on every possible object, path, or point in space. Live dimensions follow and respond to artwork changes.
Works just like other Illustrator tools! 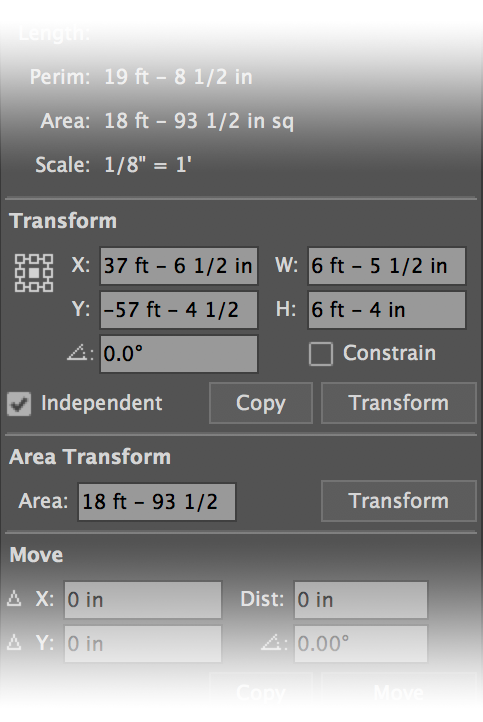 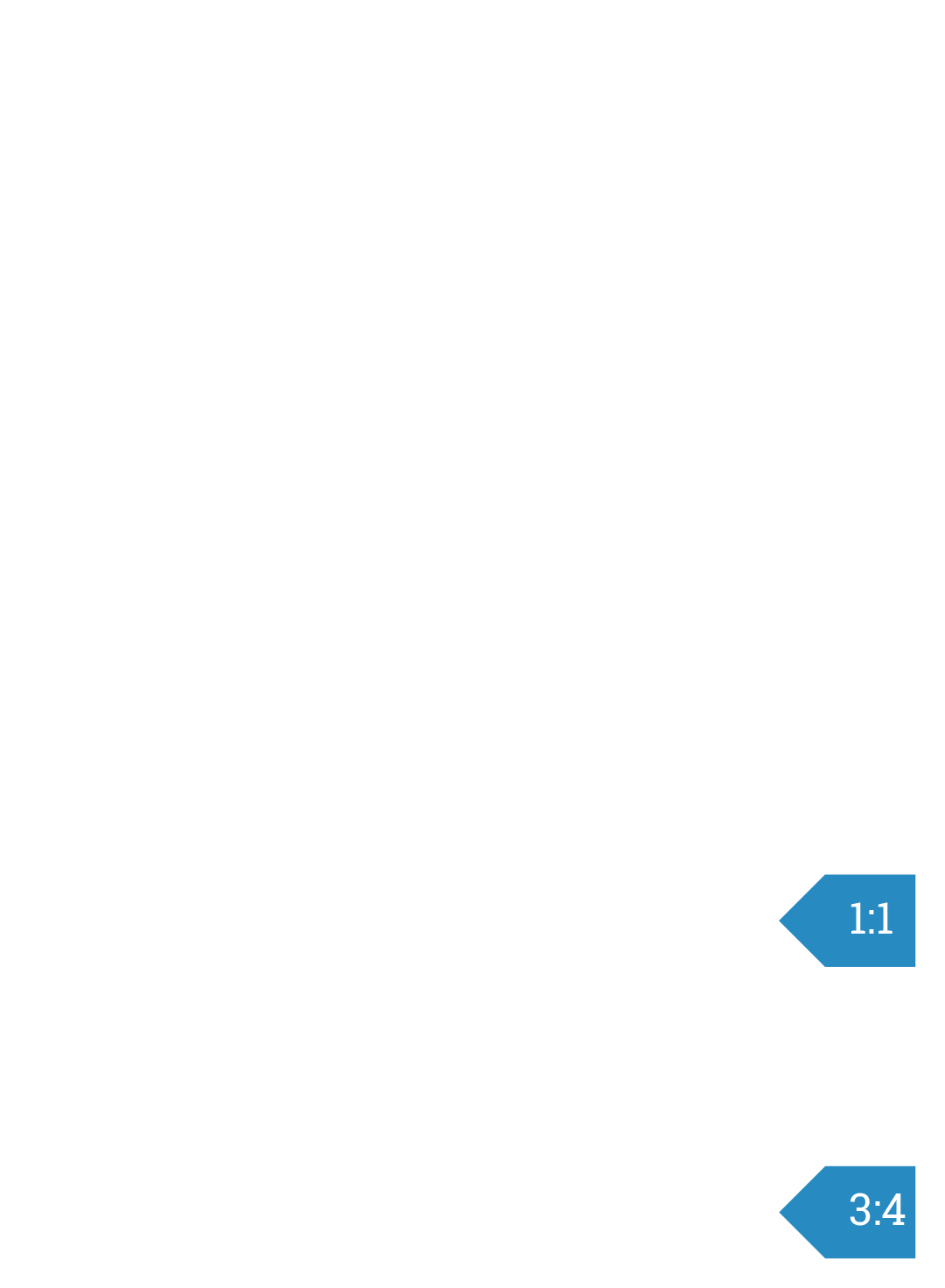 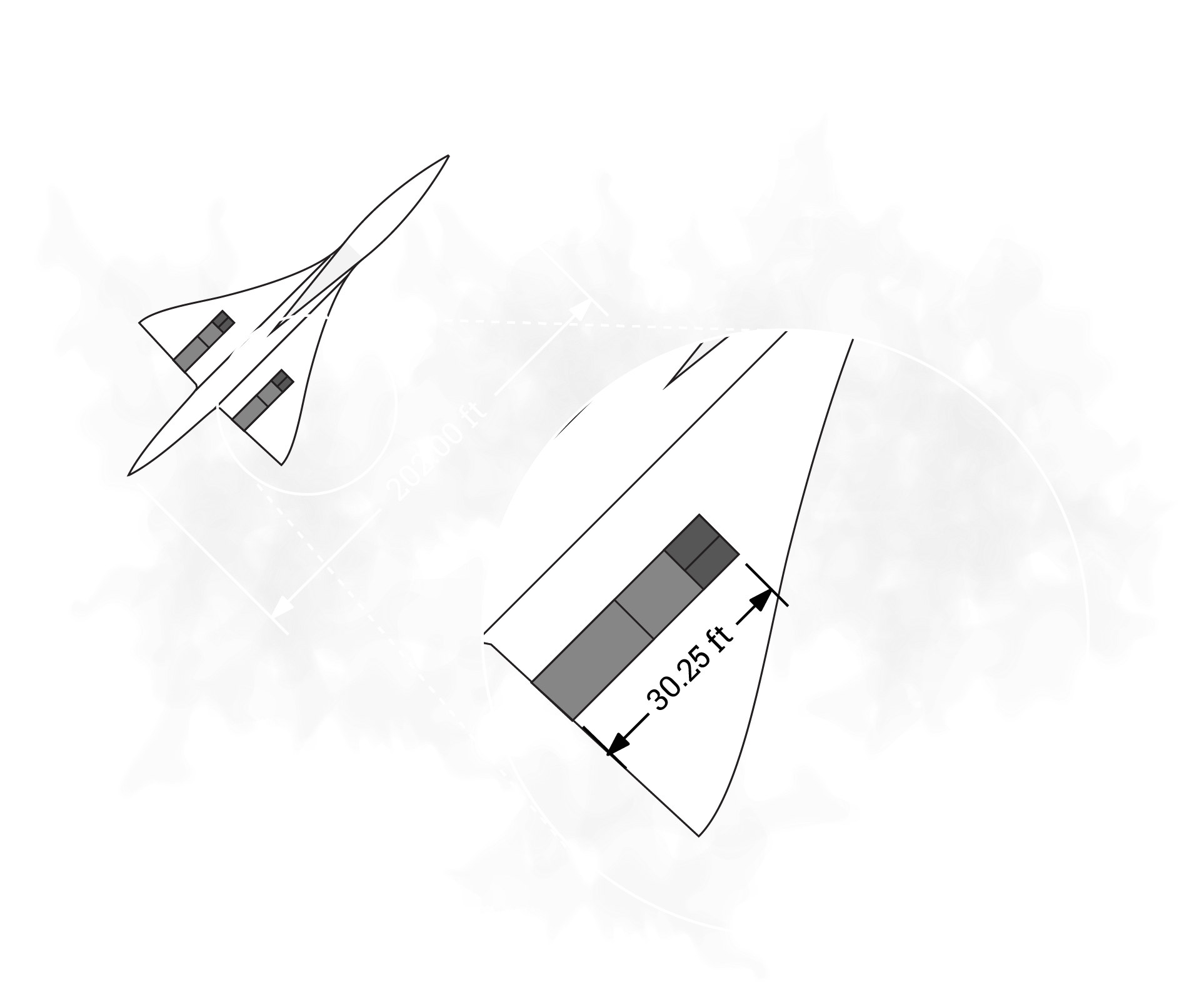 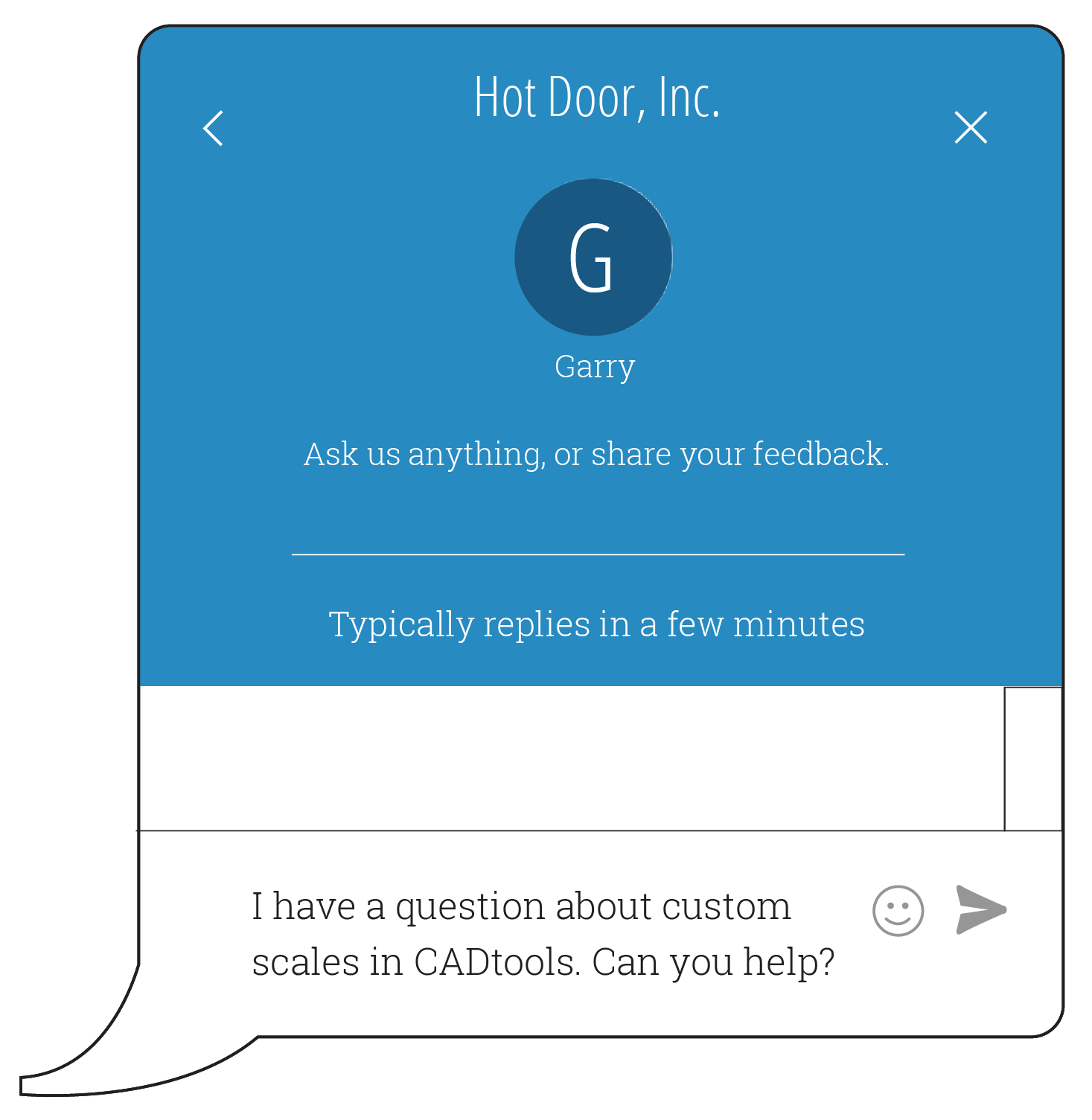 New CADsymbols library includes architecture, people, and landscape artwork that automatically scale to the target layer.
100% SATISFACTION OR YOUR MONEY BACK
Click-drag tools with seamless integration
CADtools adds 92 tools to the tool panel. Red dots indicate the number and placement of mouse-clicks to edit or create an object, label or dimension. Recent tools include Scale Line, Repeat, Repeat Along Path, Scaled Type, Grid, and Wave tools. 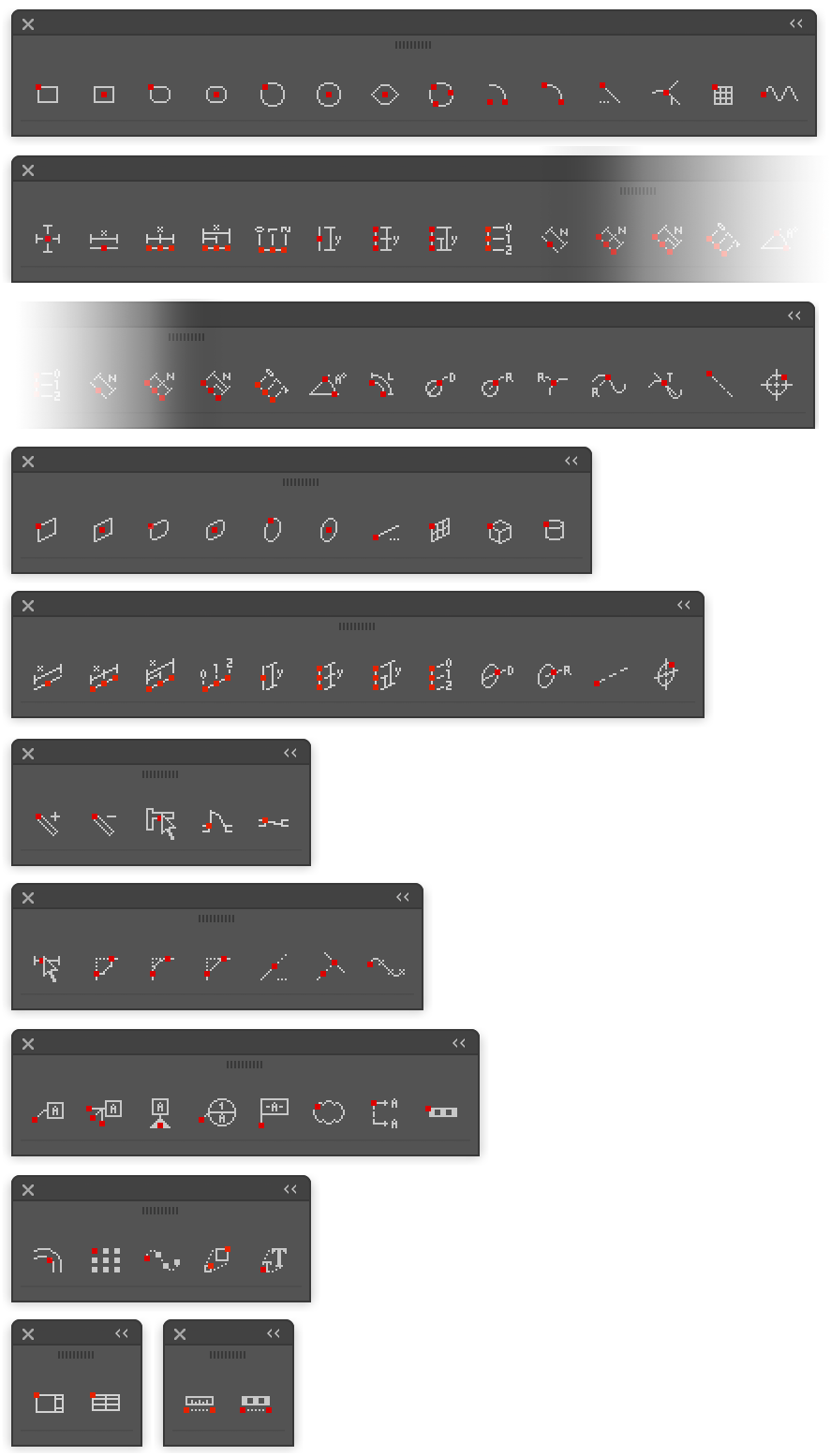 Document or layer scales and scale calculator
Select from a wide range of engineering and architectural scales or create an unlimited number of custom scales. Figuring out scale is easy with the Scale Calculator. 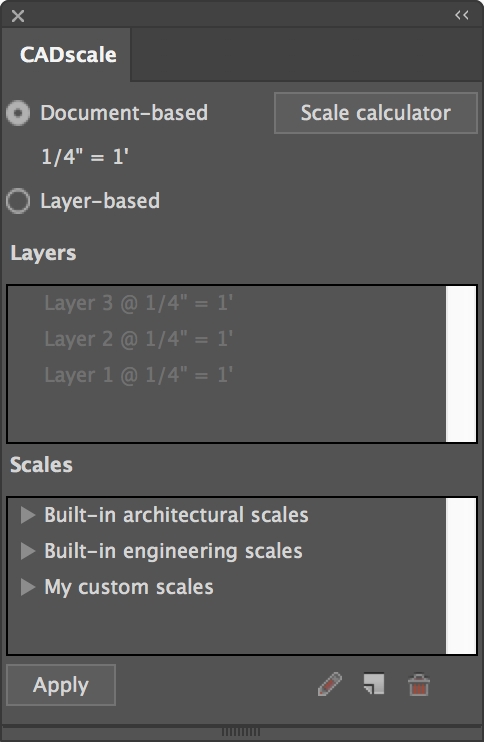 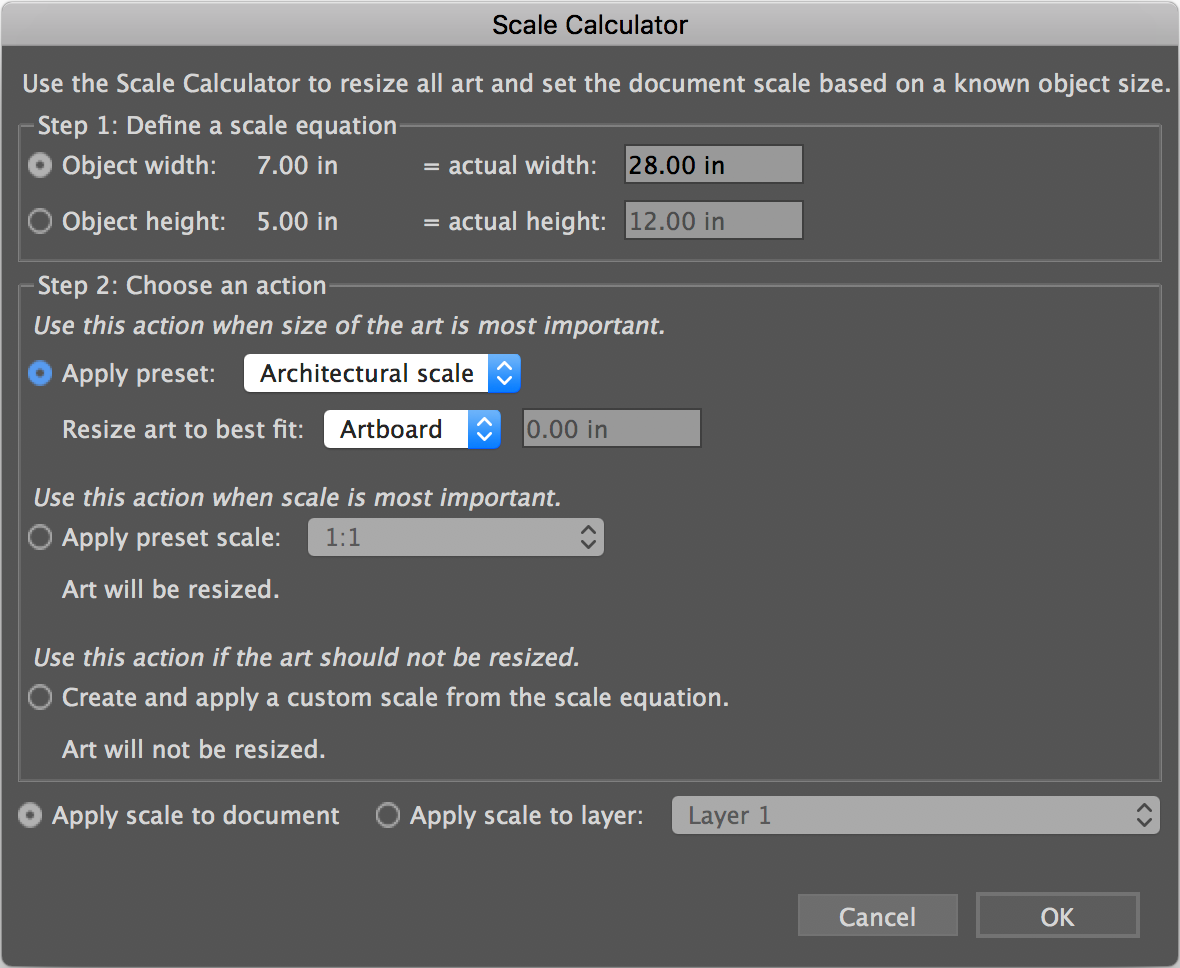 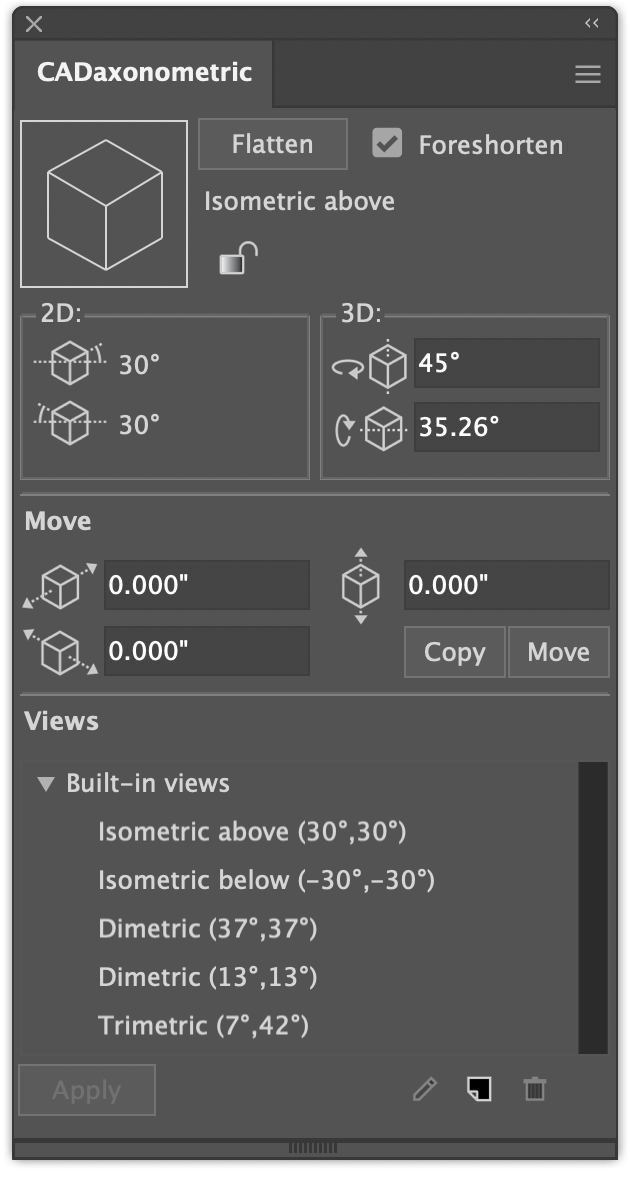 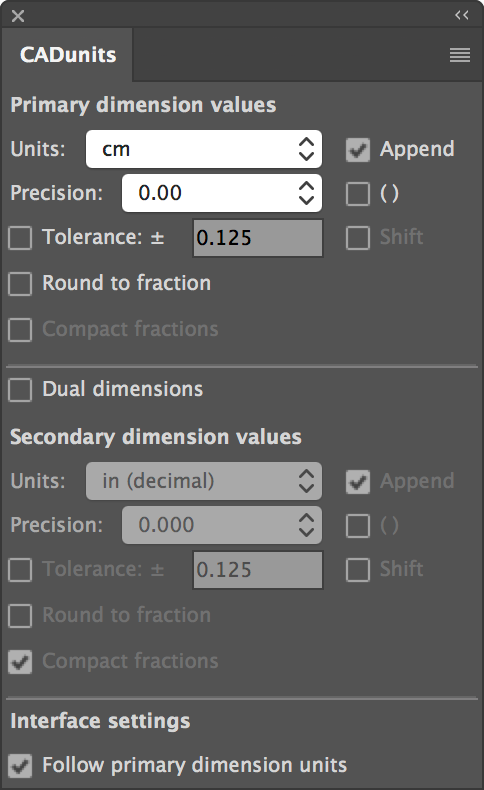 Guides and grids your way
With CADguides, customize scaled rulers and grids that can snap with CADtools drawing tools. Show full screen cursors to easily create and edit CADtools objects. 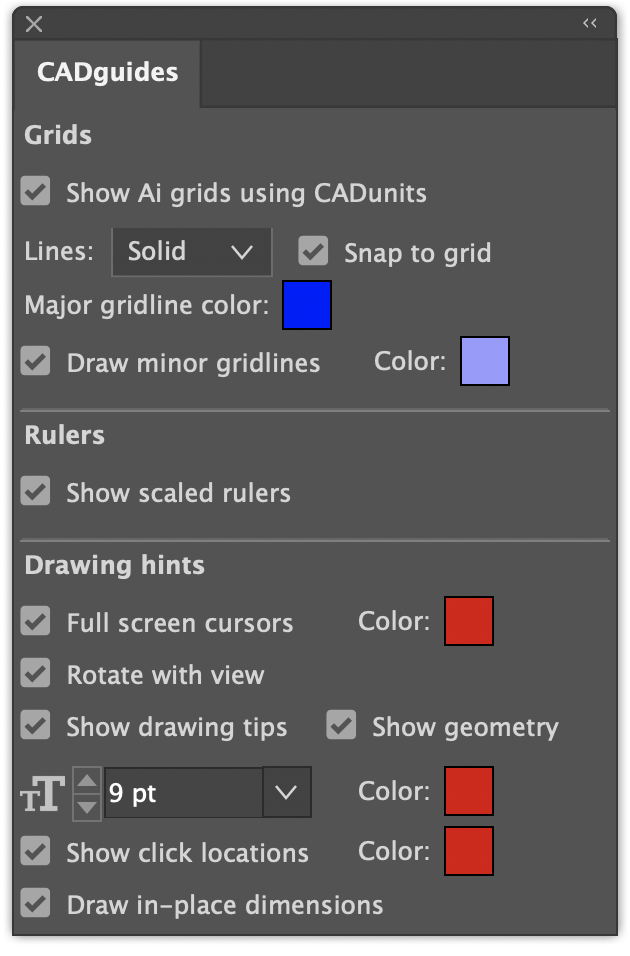 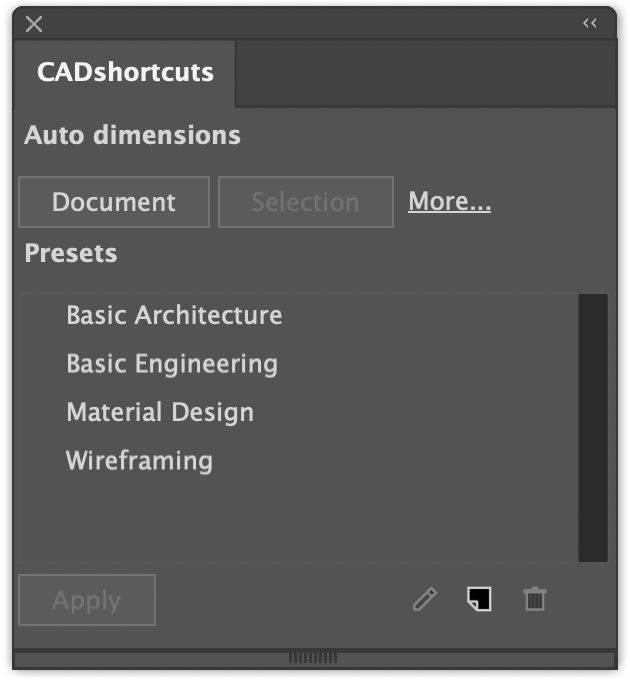 CADdashboard and CADhelp
Quickly access all tools and panels with CADdashboard. The context-sensitive CADhelp panel shows step-by-step details and video tutorials for the current tool or panel.

Each product page allows you to configure your software choices. Choose a product and then click the buy button.

For multiple license discounts, simply change the quantity in your cart.

About Us
Hot Door, Inc. is a software development company based in Portland, Oregon. The company was started in 1995 by Brendon and Shari Cheves and continues to be driven by their vision and tenacity. Products include commercial plug-ins, like CADtools and MultiPage, as well as online applications and projects like this custom web site and online store. In the last 20 years, the business has grown steadily with the same focus: user-friendly software tools for design professionals. We always enjoy giving our customers personal attention with free, friendly phone support!
Background
The first product, CADtools, was conceptualized in a university classroom in 1996. Brendon Cheves had recently graduated with a degree in computer interface design and was teaching part-time in computer-aided design. His students were using Adobe Illustrator to modify and enhance CAD files for presentation. They were burdened by the time and effort required to move back and forth between programs to merge graphics and dimensions. Brendon learned that Adobe Illustrator contained a plug-in infrastructure that allowed programming of additional features. The first version of CADtools was released for the new Adobe Illustrator 7 in May 1997.
Almost immediately, Hot Door received interest from Japan in localization and distribution. Applicraft was selected to handle this important commitment and has continued to be an invaluable partner. CADtools was hugely popular with Adobe Illustrator users, appealing to many different types of professions including environmental design, sign design, architecture, manufacturing, engineering, technical illustration, etc. Hot Door continued to develop more plug-ins for Illustrator and Photoshop to meet specific design needs not met with the applications. Hot Door Harmony was released in 1998 for Photoshop -- a color selection tool based on extensive color theory research. By the end of 1998, Hot Door Transparency was released to offer new transparent effects in Illustrator. Transparency was equally successful in its short lifespan -- Adobe added transparency effects to Illustrator in 1999.
Hot Door released both CADtools 2 and MultiPage in 2000. MultiPage offered a clever solution to bring publishing power to Illustrator with multiple page organization, printing, and PDF export. CADtools 2 was a major upgrade based entirely on user requests, offering new live dimensioning, multiple scales, and dozens of other features. The new Hot Door online store allowed for instant purchase and download, as well as the sale of third-party plug-ins. The Hot Door staff increased to include technical support and distribution specialists. 2000 was an accelerated year with products and people!
In 2002, Hot Door released Perspective to provide realistic perspective drawing features for Adobe Illustrator. Perspective proved to be the biggest development challenge to date, requiring extensive calculations to create special grids and views. As with every product, the customer feedback was wonderful, motivating more product ideas. The long-awaited CADtools 3 upgrade was released in October 2003 in response to the growing need for both 2D and isometric drawing/dimensioning features inside Adobe Illustrator. MultiPage 2 followed in 2004 for Illustrator CS with dramatic improvements to PDF file size and color page previews.
CADtools 4 was released in 2005 with improved wall tools, path division, auto-dimensioning, and necessary compatibility with Illustrator CS2. Each version of Illustrator introduces new features and code changes which result in new challenges in plug-in development. We were also proud of our own custom online store which debuted with CADtools 4, providing a user-friendly method of purchasing software with frame-based product configuration. In 2006 we completed compatibility upgrades for CS2, including MultiPage 3, CADpatterns, and Perspective for CS2. AppliCraft also updated CADgate for CS2 on Windows which added new DXF/DWG import and scaled export with Illustrator.
After another year of development, CADtools 5 was launched in 2007 for Illustrator CS3 on Power PC/Intel Macs and Windows XP/Vista, improving project workflow with CADtools presets, label options, full screen cursors, and additional custom scale support. New tools include perpendicular and tangent drawing, fillet radius and offset tools by popular demand. MultiPage 4 and Perspective compatibility for CS3 followed. We continued our support of Adobe Illustrator with CADtools 6 in early 2009. New features include an innovative Scale Calculator and tools for adjusting proportion and measuring distance. The simultaneous upgrade of our online store supports new, easy retrieval of serial numbers and multiple license discounts. CADtools 7 quickly followed for CS5 compatibility, adding new art generation tools for tables, title blocks and door/window insertion.
CADtools 8 required complete reconstruction after Adobe removed Adobe Dialog Manager from Adobe Illustrator. This unprecedented effort required years of programming perseverance and resulted in a six-month delay in release. Once the overhaul was complete in late 2012, CADtools 8 sparkled with much greater performance and interface organization. Most importantly, the new underlying Hot Door CORE™ technology promised faster, flexible, and more powerful upgrades in the future. Consequently, we were able to offer free compatibility updates to CADtools 8.2 for Adobe Illustrator CC on the day it was released.
CADtools 9 and 10 were developed with much greater confidence using Hot Door CORE™ with its ability to facilitate rapid improvements. The technology allowed a fresh focus on productivity tools, shortcuts, and CAD education. In version 9, the innovative Universal Dimension tool condensed many dimensioning tools into one. In 2015, an experimental, more sophisticated productivity tool was created and released called ControlFreak. This product was later segmented into tool groups and re-released as the Control Plug-In suite – purchasable by tool group or as one complete set. By 2016, CADtools 10 unveiled new directions in ease-of-use and accessibility. This release completely reconstructed the user guide as a context-sensitive, in-app reference with quick video tutorials. Live CADtools symbols also offered hundreds of objects in architecture, people, and landscape libraries with automatic adjustment for scale. New ideas emerged for creating artwork with even greater precision and customization!
We are continually amazed by the work of our customers who use our products for thousands of different design tasks every day. We wish to simplify work with elegant tools that suit the designer as much as the task. Thank you all for your support -- and keep up the good work!